30 Year Fixed Rate Mortgage drops, is it the result of The Twist?

The current interest rates shown below are based on a purchase of a single-family, primary residence. For current refinance rates, contact us

I don’t know if the rates will drop further, it is possible I guess.  Many experts believe it will, I am still a little cautious.  The 30 year fixed rate mortgage hasn’t dipped below 4% since it has been tracked by the Feds, so this may be a glass wall that it can’t break through.  Judging by the graph, it appears the spread between the 10 year treasury and the 30 year fixed rate mortgage gets larger.  So the question is how much further does the 10 year treasury have to drop to pull the rate below 4%?  What do you think, post a reply.   It has certainly grabbed my interest again to continue following this. Operation Twist has been launched by the Federal Reserve.  The idea is the Federal Reserve will buy long-term T-Bills, $400 billion worth.  The theory is it will lower the long-term interest rates.  This is also supposed to give banks cash balances.  Sounds good, except it has been tried in the past and did not work.

The term “Operation Twist” comes from the early 1960s, when the Fed tried something similar. (It’s named for the Chubby Checker hit.) It may have had a small effect — one recent studyfound that it drove down the interest rate on Treasury bonds by 0.15 percentage points. But the effect on mortgage rates was smaller, and the effect on corporate borrowing costs was tiny.

I don’t care if mortgage rates are 2% or 4%, if  you are unemployed you still won’t buy a house!

How did the market respond to this news?  Take a look at the Dow Jones chart for the day and see if you can identify what time the news was announced: 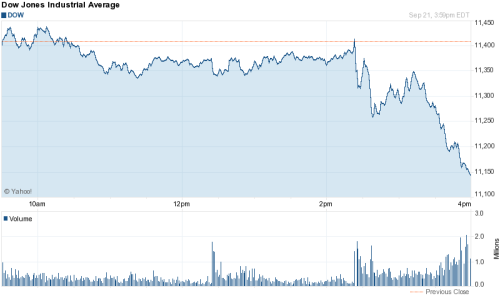 Welcome to the Lost Decade.

I do hope this works, but I am not optimistic on this strategy at all…

This is not surprising news, and I don’t find it too alarming at this point.  We have had a turbulent couple weeks in the stock market bring uncertainty to many households.   We are back to 1996 levels on mortgage applications.  What is surprising is that it is the complete opposite of record low interest rates….  which puts into perspective the extent of the uncertainty out there…

The seasonally adjusted gauge of loan requests for home purchases tumbled 5.7 percent to its lowest level since December 1996, the MBA said.